I recently travelled to New York with my partner for our close friends’ wedding celebration. Whilst in New York, we were keen to witness on-trend approaches to all things hotels and dining in the bustling metropolis that is Manhattan. I think we pretty much experienced both the best and worst of what the great city had to offer.

We arrived in Manhattan with a certain level of expectation as to what we would see, taste and do. We certainly weren’t travelling 5-star all the way, but let’s agree, you shouldn't have to be in a 5-star venue to receive excellent service and have great experiences.

Of particular interest to me is the evolution of the ‘modern boutique lifestyle hotel’ concept made famous by industry icon Ian Schrager in New York. Schrager originally gained fame as one half of the duo which owned and operated the legendary nightclub of the late 1970’s, Studio 54. As a young hotel professional, I was fortunate to be employed by Ian Schrager’s hotels in London and learned first-hand about the origins of this concept and how the idea of offering guests unique and memorable experiences could be achieved in new and creative ways.

Significantly, the first hotel that Schrager developed, Morgans Hotel, which opened in 1984, closed its doors for the last time in July this year and will be converted into high-end micro-apartments. Dan Howarth in dezeen.com wrote that “The hotel's closure marks the end of an era for a vastly influential project. Schrager and former business partner Steve Rubell sparked a worldwide phenomenon when they renovated the building at 237 Madison Avenue in 1984, with French designer Andrée Putman. With the first in the Morgans chain, they were credited with starting the trend for boutique hotels – smaller hotels with upscale accommodation, in fashionable urban neighbourhoods – which popped up in cities all over the globe following its success”.

Being in New York, it was a welcome opportunity to experience Ian Schrager’s latest hotel project, PUBLIC, which opened on New York’s Lower East Side in June. Delivering yet another game-changing concept, Schrager believes it may be the most important idea he has contributed to the industry. That is, offering modern standards of luxury, design and service at an affordable price point or, as the company line positions it, “luxury for all”.

Achieving such a goal does mean that guests go without a few common hotel features such as a check-in desk, room service and turning down of beds. Instead, iPads provide guests with the ability to check themselves in and out, extra towels and amenities can be found at designated locations throughout the property, and food orders are collected from a shelf adjacent to the lifts at lobby-level. Their upscale restaurant is headed up by Michelin-starred chef Jean-Georges Vongerichten who also oversees a counter service café-cum-grocery store style concept serving organic food options and ready-to-go meals.

For me though, the views from the rooftop bar at PUBLIC remain one of the most memorable highlights of the entire trip.

Whilst in Manhattan, we were naturally keen to visit a couple of iconic restaurants to tick off the bucket list and understand the experience of these establishments directly. First cab off the rank was Momofuku Ssam Bar, a restaurant at the epicentre of hospitality trends, and brainchild of David Chang who has pioneered the whole premium casual dining space since the mid-2000's.

In 2012, I lead a recruitment team in Sydney which was responsible for hiring the staff for Momofuku’ Seiobo, the brand’s first venture outside of New York. With this prior exposure to the brand, I was excited to visit their Ssam Bar offering, going back to the source and experience this first-hand.

Ssam is an institution in New York City, offering a plethora of Asian inspired fusion food choices. Service is more casual than traditional fine dining establishments and was efficient and friendly. As expected the ambience provided a modern looking space with an abundance of timber and wood styling. No tablecloths in sight. Ssam has a large focus on their bar space and patrons take advantage of this by eating food at the bar or having a drink in that vicinity of the establishment. The standard of food and flavours was exceptional, and well matched by service and staff who were knowledgeable about what was being offered. Interestingly, their walls were adorned with local tennis great John McEnroe’s pictures. Music being played was typically classic rock type numbers and hits from the 1980’s.

Other than their overwhelming success for pioneering modern premium casual dining concepts across the globe, if Momofuku is 'famous' for one thing, it's their steamed pork buns. Our group made easy work of demolishing a half dozen of those. 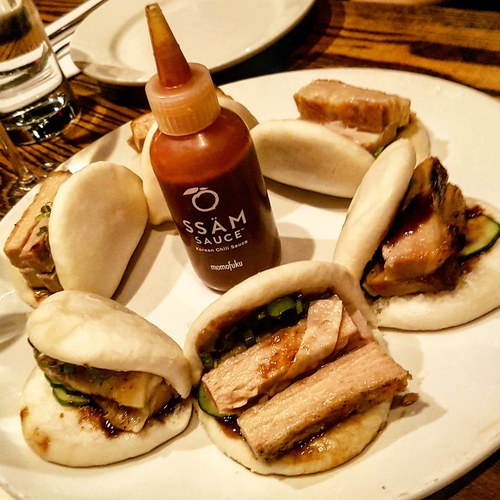 Hot off the heels of our Momofuku experience was a planned visit to Daniel Restaurant, a refined and elegant French offering that is the spiritual home of world-renowned French chef Daniel Boulud. As you can imagine, expectations of that night were significant. After all, this is a two Michelin star restaurant.

Navigating our way through heavy Manhattan traffic to the Upper East Side, we arrived at the restaurant and there was a placard out the front of the restaurant saying it was closed due to a burst water main in the street. To our disappointment, we didn’t receive an email or a phone call to let us know despite the restaurant booking service confirming the reservation by email only a few hours prior. That same email acting as a reminder of the restaurant's cancellation charges in the case of guest non-attendance.

For an establishment of such high regard, our expectation would have been for someone to be there in person to receive us and provide personalised advice to alternative options for consideration. In fact, it was the workmen digging up the road who provided the greatest insight of the situation not only to us but another couple who had now joined us on the footpath outside the closed venue - their twentieth wedding anniversary without the kids had not turned out as they had hoped. Fortunately, a French restaurant alternative was found nearby although it could never be as good as your first choice, especially when it was one of hundreds of restaurants we could have chosen for a special dining experience that evening.

Upon emailing the restaurant a few days later (not the other way around!) I received an apology and offer to rebook with a complimentary bottle of champagne. Unfortunately, our busy itinerary did not afford us the opportunity to even consider this offer.

All in all, I loved New York and can’t wait to get back there. It remains one of the world’s most fascinating melting pots of culture and creativity, home to the talent responsible for hatching some of the hospitality industry’s most prevalent innovations of modern times.

Ultimately, no matter which part of the globe, providing service that is perceived as ‘excellent’ starts with meeting expectations that have been established and doing all you can to exceed expectations to ensure a truly memorable experience each time. This is the key to high performing businesses and high performing teams. This is the essence of hospitality – people who have a genuine passion and take enjoyment for providing elevated experiences to their guests. Going above and beyond what you expect ensures you are likely to return and recommend.

At THE MONDAY GROUP, high-quality talent are nurtured, supported and connected with leading employers in the hospitality sector. They take a holistic approach to talent management and pride themselves on having in-depth, direct experience working with some of the world’s leading hospitality businesses for decades.